The other day, my son was glancing through family photos scrolling on my screen saver and he was quite shocked at how much he and his dad look alike at the same ages. The Boy told me the only differences are that Dad was browner and skinnier. It doesn’t take a rocket scientist to figure out that the reason for both of those differences is that Dad spent nearly all of his time outside playing when he was a child. Whereas we live across the street from a lovely, yet lonely park that our offspring has yet to visit on purpose.

A common theme that runs through kids books these days is to remind them that there is this whole wonderful place just beyond a door where fun and experimentation are possible and they can be and do anything they want. I do find it sad that we have to teach our children this skill that seemed so intrinsic to our own growing up. I am glad that there are authors and educators out there willing to take on that task with us. 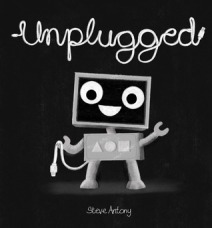 Unplugged is the story of Blip. Blip spends her days plugged into her computer for all the right reasons. She plays games for sure, but she also learns new skills, takes advantage of educational help, learns about new places and makes friends. However, as parents have been asking since computers first became a part of our homes, “What happens when the power goes out?” Blip finds out. Tripping over her plug in the dark she tumbles out the door and down the hill and into a river that takes her into a new kind of adventure. She plays games and learns new things and makes new friends and guess what, the world doesn’t end.

The message is a bit on the obvious side. Outside-GOOD Electronics-Bad, as the extreme contrast in artwork, would imply. Monochrome pixels versus a bright open woodland setting, quite beautifully done, I might add and quite obviously where Mr. Antony excels. While I do think that any one-sided message is not really how we should be teaching our kids, the message to unplug and play in the 3D world once in while is a good one and I do believe that most kids will find Blip to be so adorable they won’t really be noticing that they are being taught, and that is how it should be.

Steve Antony has so far written and illustrated 16 picture books, including his 2014 award-winning debut The Queen’s Hat, the bestselling Mr Panda series and Unplugged. He illustrated Tim Minchin’s When I Grow Up and a cover of the Famous Five. Steve lives in Swindon, England, and is Patron to Swindon Libraries Children’s Services. Visit him online at www.steveantony.com

As an Amazon Associate I earn from qualifying purchases.

Every page of this blog contains affiliate links to any of several services that I can earn commisions from. The products and services offered in these links are products I use or believe in good faith that my readers will enjoy.

Shelle's ReaderRank
Shelle has reviewed 1007 books with an average rating of 4.5 out of 5.
569 people have found Shelle's written reviews to be helpful on Goodreads.
See more...

Top 10% in books from large presses